Italian Public Opinion on Immigration and the Labour Market 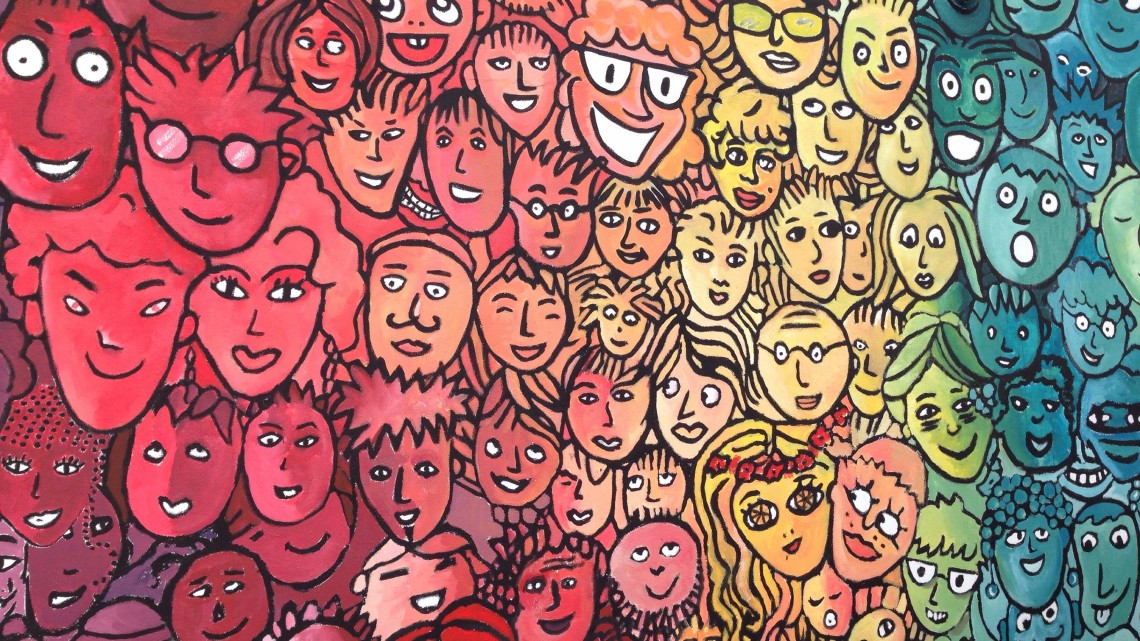 With changing demographic trends and increasing mobility, migration will remain at the heart of political debate. The concerns and anxieties of the public – regardless of the accuracy of the views – should be addressed rather than dismissed. Only then will public opinion on immigration and the labour market be seen through a more positive light.

Despite over sweeping generalizations about public opposition to immigration, largely focused on its impact on the labour market, more sophisticated research on the state of public opinion in Italy reveals that public opinion on this matter is more complex and nuanced. There are no two uniform and static groups of people who support or oppose immigrants and hold consistent beliefs.

Over the past two years, More in Common has been conducting attitudinal segmentation studies of the public’s opinion towards immigration, refugees, and identity. Recognising that opinion on immigration and refugees is not formed in a void but, rather, it is strongly connected to a variety of issues, More in Common’s studies incorporate a wide array of questions, including metrics drawn from different social science disciplines, to develop a quantitative and qualitative study.

More in Common’s research in Italy shows seven distinct groups in Italian society who think differently about issues of identity, belonging and the ‘open’ and ‘closed’ values issues of immigration, refugees, diversity and national identity. Each segment prioritises different issues and is driven by different values and concerns. Understanding those differences – and especially the characteristics of middle groups – is essential to engaging mainstream audiences effectively. 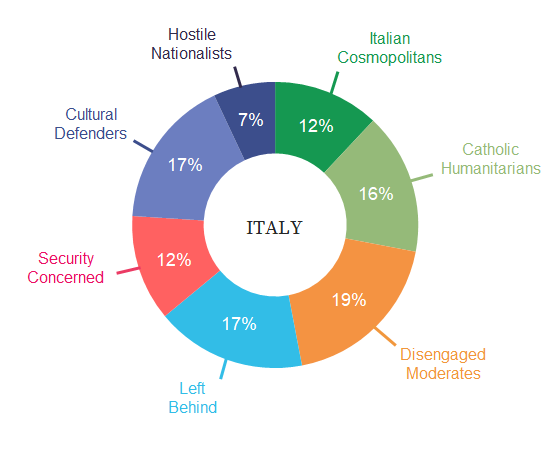 On the one hand, we identified two open-value groups, who support immigrants and refugees: the Italian Cosmopolitans and the Catholic Humanitarians. On the other hand, there are two closed-values groups: The Hostile Nationalists and the Cultural Defenders. These two groups have highly negative views of immigrants and refugees on the basis of the supposed threat that they pose to Italian identity, the incompatibility of their values with Italian values, as well as the negative economic impact, amongst others.

In the middle, the segmentation analysis revealed the existence of three groups that are sometimes referred to as the ‘conflicted middle’ or ‘anxious middle’. Up to 48 per cent of the Italian population belongs to one of the conflicted middle groups.

The Disengaged Moderates are the largest segment in Italy. They tend to align with the views of the ‘open’ segments. They are not strongly opinionated and they are often removed from debate. While they do not know if there is pressure to think a certain way about the topics of immigration and refugees, they worry that media reporting on subjects like immigration and refugees is unfair and inaccurate. They are unsure whether immigration is good or bad from both an economic and cultural perspective. Often their feelings towards refugees, immigrants, and Muslims are warm. Since they do not feel threatened by immigration, they do not advocate drastic action to stop it. After unemployment, they see corruption, the political situation, and immigration as the joint next most important issues facing Italy today. Many young people (18-30s) and an even balance of men and women belong to this group. They are highly educated, and while many are still studying, others hold white collar jobs including working as teachers. They live all over Italy and are not clustered in one region or place.

The Left Behind are distinctly pessimistic, politically disaffected, and desperate for action. They believe that the situation for them, the economy, and Italian society has worsened over the past year. While they are highly concerned by economic issues and unemployment, they also cite corruption as one of the top issues facing Italy. For them, the Italian economy is rigged to advantage the rich and powerful. Thus, they do not believe that it is easy for people like them to succeed. They are the most opposed to immigration, believing that it is dividing the country and draining resources. They frequently feel like strangers in Italy and harbour cold feelings towards Muslims, refugees and immigrants. Yet, they support the principle of asylum and feel compassionate towards unaccompanied minors, whom they wish to resettle in Italy. For them, refugees are welcome if they accept Italian culture. They feel most pressured to think a certain way about the immigration and refugees. Members of the Left Behind are older (many over 65), and there are more women than men within this segment. Many hold high school diplomas as their highest level of education. Members of this segment often live in the north east of the country.

The opinions of the Security Concerned are shaped by their perceptions of threats to security in their community and country. They believe that it is too dangerous to let refugees into Italy due to the major threat of terrorism, and that Italy needs to take steps to stop terrorism at all costs, even if it means ignoring human rights. While they are optimistic about the future of the Italian economy (they believe that globalisation has been good for the economy), they are pessimistic about the future of Italian society and their personal prospects. They are worried about immigration and crime. They perceive immigrants and refugees as violent and support the closure of Italian borders. Despite their heightened threat perceptions they are concerned about a growing opposition to migrants from all sides of the political spectrum, and they are also worried about increasing levels of racism and discrimination. This segment is made up of many middle-aged to older men and women (many 31-50s and 51-64s). They often have lower levels of education, and many hold blue collar jobs or are retired. Many of the Security Concerned live towards the centre of both the north and south of Italy.

Public Opinion on Immigration and the Labour Market

Labour market competition is not the principal driver for any of the segments we identified within the Italian public, but it does capture a significant portion of the public debate. Asked whether they think that immigration is positive or negative for the country, 18 per cent of Italians believe that immigration is positive, 57 per cent negative, and 23 per cent that it is neither positive nor negative.

The trend is slightly different when asked about the economic impact of immigration more specifically. Overall, 52 per cent of Italians say that immigration does not have a positive impact on the economy. There aren’t significant variations by region but there are substantial differences however between the segments, with the Left Behind feeling more strongly that the impact on the economy is negative. 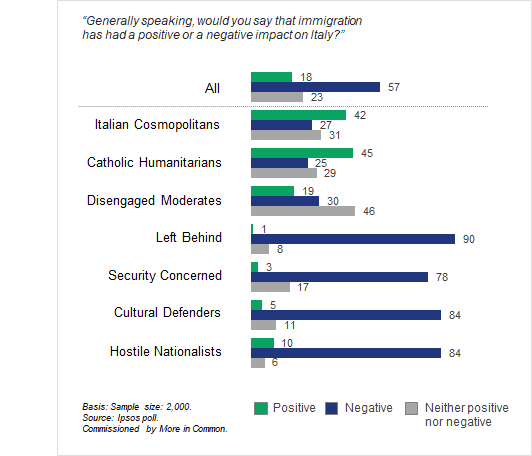 What is this assessment based on? The potential benefits of immigration due to the new influx of skills and the immigrants’ drive to work is offset by the costs. The negative impact on the economy seems to be closely related to beliefs on the effects on the welfare state and to resource competition. Only the Italian Cosmopolitans and the Catholic Humanitarians would say that immigration is good for the economy. 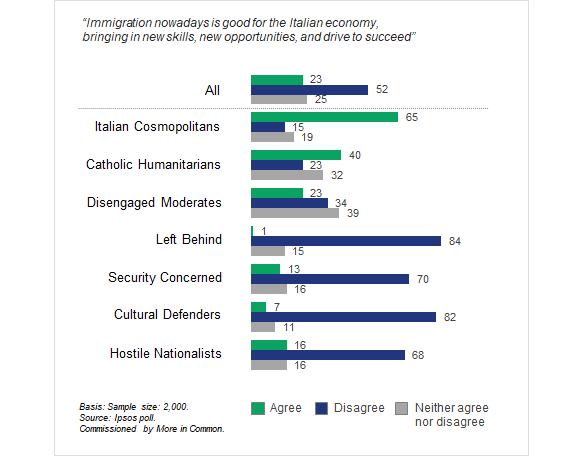 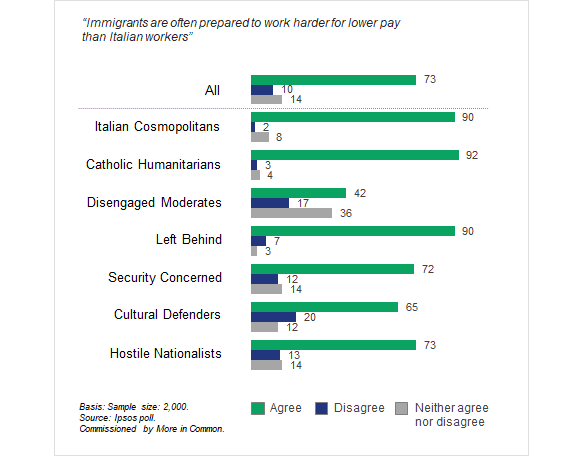 The Left Behind believe that immigrants are in fact taking away jobs from Italians and are worsening their labour conditions by bringing the salaries down.

“There are jobs which are their monopoly … think of the caregivers”

“There is a business behind that, think of the shelters, managed by the politicians. Politicians are taking advantage of that, as the labour costs are getting lower and lower. It is not true that without immigrants we would have no caregivers. An Italian cooperative will sack the Italian employees and keep the strangers”

The Left Behind agree with the Italian Cosmopolitans and the Catholic Humanitarians in that immigrants are often prepared to work harder for lower pay, but while the latter believe that this is a positive reflection of immigrants’ worth ethic, the Left Behind see another element of the negative effect of immigration on the market. In that way, it is not a surprise that the Left Behind (as well as the Security Concerned, the Cultural Defenders, and the Hostile Nationalists) are convinced that employers should prioritise hiring Italians over immigrants.

Globalisation has its winners and losers. Host populations might lose jobs and do not benefit from programs aimed at re-educating and re-integrating them into the labour market.  If there are initiatives that are targeted at immigrant populations and none that help the host population, it is likely that there will be a public opinion backlash that results in increased support for anti-migrant populists.

Ultimately, the success of policies in support of immigrants and integration efforts is at least partially contingent on public support. This is why it is necessary to understand the interconnectedness between a variety of topics and the nuances in the public debate. There are groups that do not oppose immigration in and of itself but have concerns that can be alleviated through proper framing and targeted measures. Segmentation analysis allows us to understand the public’s concerns and devise targeted strategies to address them.

This research is part of a study that will be published in July 2018. For feedback to the authors or to be notified of when the report is released, please contact Míriam Juan-Torres at miriam@moreincommon.com 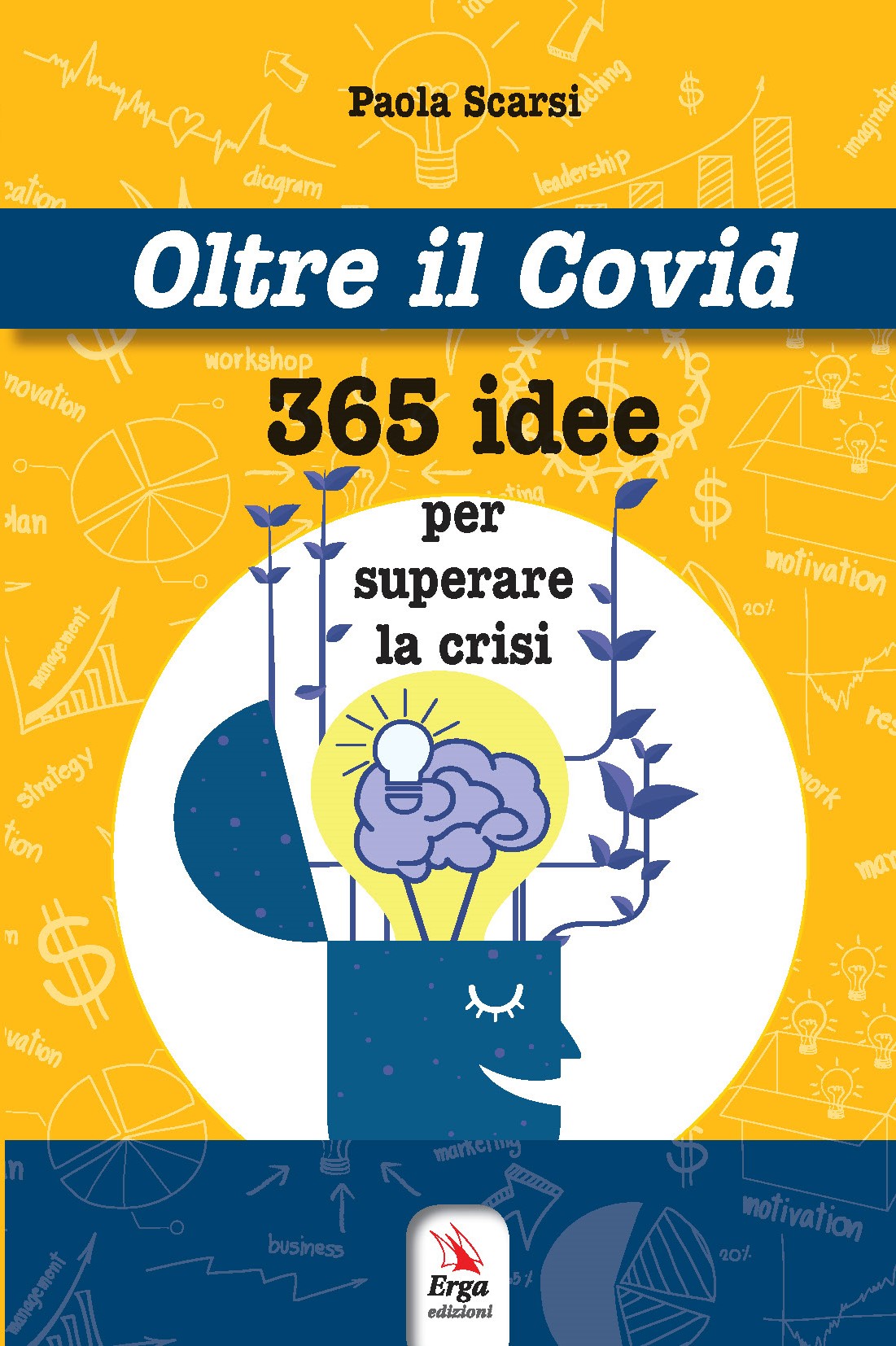 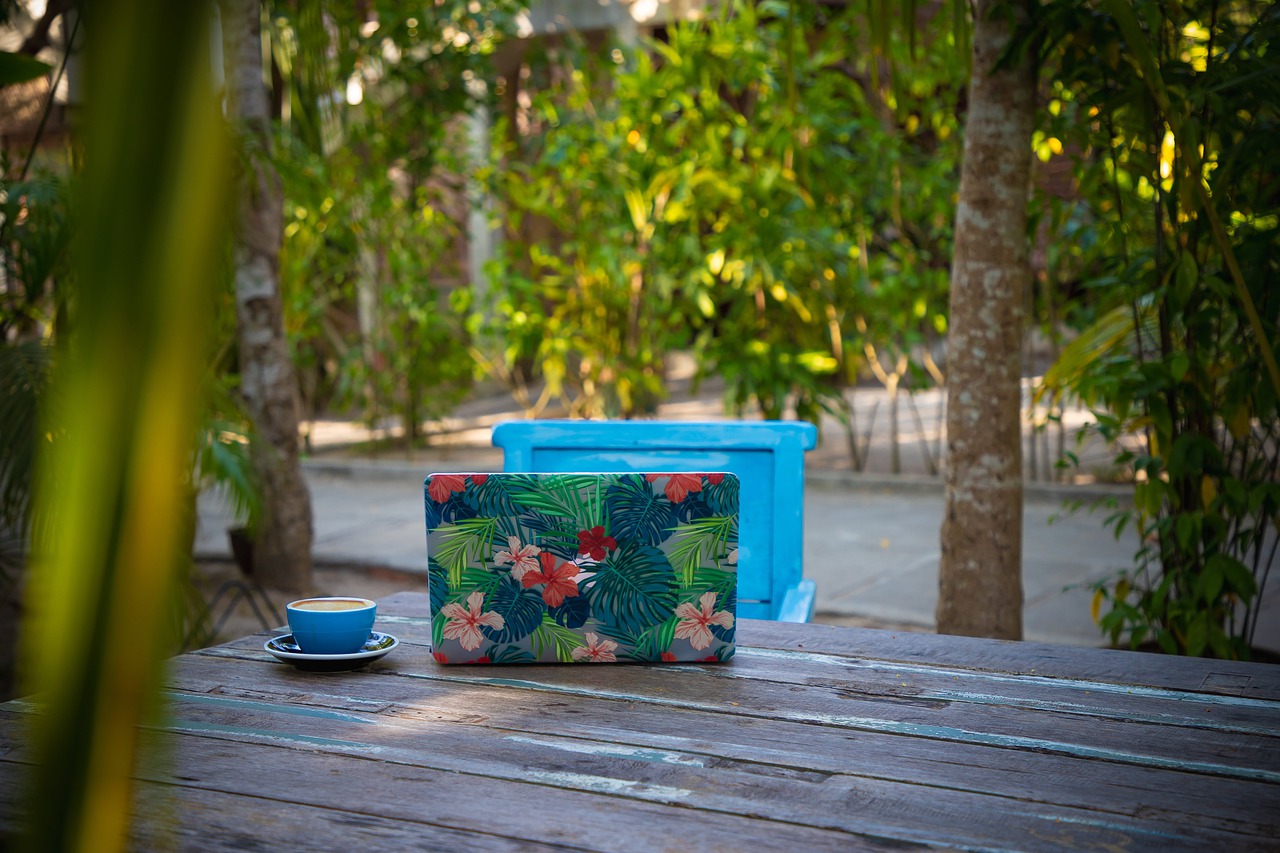 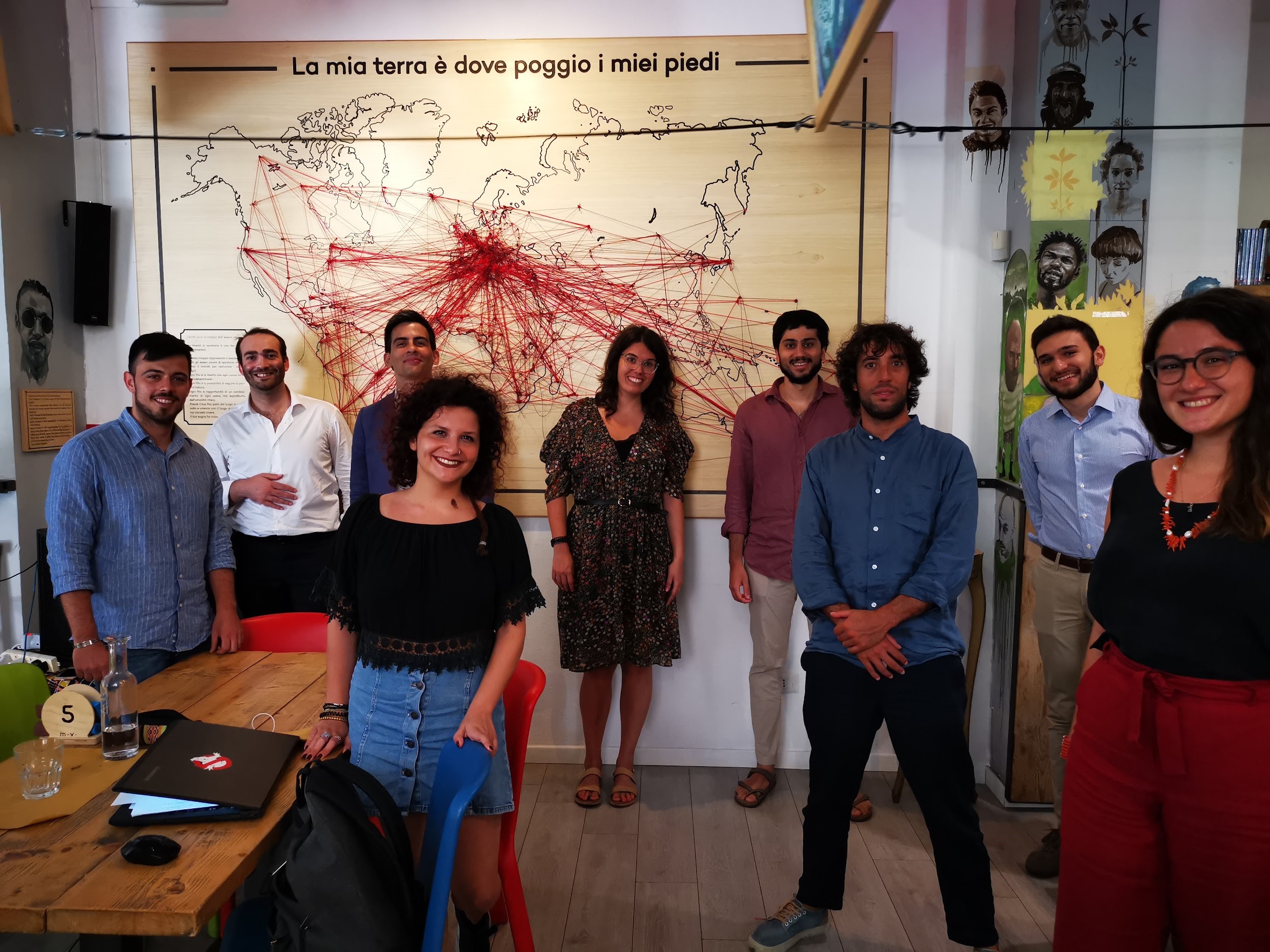